“Train to Sevmash” is now available! For FREE!

When I was approached to contribute a story for 7&7: A DSP Publications Anthology of Virtue and Vice, I immediately chose “mercy” as the virtue I wanted to write about. My first idea had to do with a police officer chasing down a criminal, but ultimately choosing to let him go. Unfortunately, the more I thought about that idea, the less I liked it.

But I’d recently found a tutor to help me brush up on the Russian language, which I’d studied a very long time ago in college, and I’d also just read Ian Fleming’s original novel Casino Royale. Suddenly, it clicked! A secret agent! And he wasn’t trying to capture somebody—he intended to assassinate his target.

Since I’m not British, my secret agent wouldn’t be, either. He’d be American, a former member of the Special Forces. And less upper crust than Bond, with a bit of Mack Bolan and John Clark (from Tom Clancy’s Rainbow Six) thrown in. Agent Jax Colby. I was setting this in the late 60s, during the Cold War, when the USSR was developing Victor Class nuclear submarines, so that would be the impetus of the agent’s mission.

I spent a ridiculous amount of time studying Soviet naval bases, and determined that the most likely place a submarine of that class would be docked for testing would be Sevmash. (I’d originally picked Murmansk, and I no longer remember why that wasn’t viable.) So how would I get an American spy into a high-security Soviet naval base?

Initially, the story was going to revolve around Colby’s adventures in Sevmash itself, once he’d infiltrated the base. He was there to assassinate an American defector. But a throwaway line I’d written in the first paragraph about how he’d killed an innocent man on the train to steal his identity intrigued me, and I found myself more interested in exploring how that had gone down, so I rewound the timeline to that night.

Colby needed a target who had a similar physical description to himself, and who was en route to the location on a fairly long journey, being transferred from another base—Murmansk. It was possible to travel by train between the two bases, but the trip took several days. This, of course, was in the days before information could be transferred easily over the Internet from one city to another, which would work to Colby’s advantage. He would have to have forged papers with his photo, but the Russian’s vital information—internal Soviet travel papers had a stamp across both the photo and the document, so simply replacing the photo would be an arduous task. As long as nobody in Sevmash had seen this man—Yuri Ivanovich Veselov—Colby should be able to get in and out. He just needed to kill Veselov on the train to Sevmash and step into his identity.

The only problem was, in order to kill Veselov, Colby had to get him alone. And that meant getting close to him. And the closer he got, the more Colby would be forced to realize Veselov was not only an innocent in this game, but in many ways a kindred spirit and downright likable.

In fact, he was kind of adorable….

After I finished the short story Train to Sevmash, it was clear to me that I’d just begun to explore these characters and the world they inhabited, so I got permission from DSP Publications to expand the story into a full-length novel (tentatively called Chimera). That’s about half completed now, with the Train to Sevmash story taking up chapters five through seven, and I’m hoping to finish it this summer. Then, perhaps, it will be released next year. 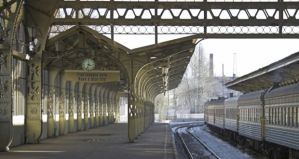 Jax Colby is an American secret agent operating within the Soviet Union in 1967. His assignment is to infiltrate the Sevmash naval shipyard in Severodvinsk in pursuit of an American scientist turned traitor to his country. But in order to do this, he must first kill a naval lieutenant traveling to the base and steal his transfer orders. He homes in on his target on the two-day train ride from Leningrad to Belomorsk.

But there’s one problem. Lt. Yuri Veselov is handsome and friendly. As Colby spends time with him, he begins to like him—and it might be more than friendship. The train draws nearer to Severodvinsk, and Colby grows increasingly reluctant to do what he knows he must—kill Yuri Veselov.

(This story is included in the free anthology 7&7: A DSP Publications Anthology of Virtue and Vice )