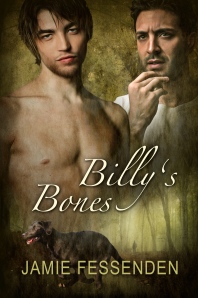 I just received the cover design for my upcoming psychological drama, Billy’s Bones!

The cover is by Lou Harper and I love it!

We went through several variations, some of which might have been terrific for a lighter novel.  Unfortunately, this is a fairly dark book, with Kevin tormented by repressed memories that break through in his nightmares and cause him to have panic attacks in certain situations—memories of abuse in his childhood.

One thing I insisted upon was the dog.  Shadow is based upon my own black Lab, Kumar, who went through a period of adjustment when we got him home from the shelter—getting over an irrational fear of going up and down stairs and peeing on boxes indoors.  In the novel, Shadow’s adventures parallel what Kevin is going through to be with Tom.

“Billy’s Bones” has been contracted!

I just signed a contract with Dreamspinner for my psychological drama, Billy’s Bones!  For those who haven’t been following my progress on that novel, here’s the “blurb” I sent in my cover letter:

Kevin Derocher was just thirty-two when he walked into Tom’s office, newly married, a baby on the way, and the collar of his red flannel shirt pulled up in an attempt to hide the bruises around his throat caused by hanging himself in his garage.  After this initial encounter, therapist Tom Langois is convinced he’ll never see Kevin again, until the man turns up three years later to make repairs on Tom’s new house.

The two men become fast friends and Tom begins to suspect that Kevin may be interested in more than just friendship.  But Kevin is haunted by something from his distant childhood—something so terrible that he’s blocked it from his mind.  Not only do these suppressed memories make it impossible for Kevin to get close to anyone without panicking and lashing out, sometimes violently, but as they begin to surface, it becomes apparent that Kevin may hold the key to the disappearance of a boy from his neighborhood twenty-five years ago.

The picture on the left is what I pictured Kevin looking like.  Tom looks like this guy: 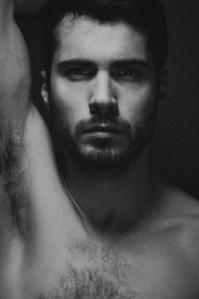 So this week I decided to go back and re-read the novel.  I’d already had a conversation with my mother, who is a psychologist with experience treating PTSD, and I learned that I’d handled several things incorrectly in the therapy scenes.  Or you might say I had Tom and Susan doing things the way they used to be done, and psychology has learned a thing or two since then.  For example, it’s no longer considered essential (by many therapists) to pressure the client to remember suppressed memories.  That can cause them more trauma than simply leaving things alone.  And giving someone something to relax him, such as Valium, before experiencing a possible trigger in a controlled setting isn’t as good an idea as I’d thought.  It can do additional harm by distorting the memories further.  (Some therapists don’t believe in repressed memories, but my mother has worked with enough cases to take them seriously.)

So I sent Mom the specific scenes in question to get some feedback on how to make them more realistic.  Hopefully, since the novel is already contracted, we’re just talking about tweaking things a little.  In the future, I’ll remember:  always check with Mom!

In re-reading the novel, I’m still finding it engrossing.  But Tom is seeming a bit more like an asshole than I remembered.  My beta readers didn’t seem to hate him, so maybe I’m just seeing him from a bad angle at the moment.  But I may try to make him a bit less pushy in edits.

Of course, the really frustrating thing about re-reading a novel after it’s been submitted, but before the first edits come in from the editors is that the typos and mistakes I find, I can’t correct.

How on earth did I not notice that I’d failed to capitalize one sentence?

I finally finished the contemporary psychological drama I’ve been calling Billy’s Bones (awful, awful title!) and several friends are reading it to tell me if it’s any good.  I’m really not sure.  I like the first half, but it gets very grim in the second half.  Ever read the beginning of Alice Sebold‘s The Lovely Bones?  That’s about the level of grim I’m talking about.  To a lesser extent it resembles the revelation of Tom’s repressed memories of “Callanwolde” in The Prince of Tides (considerably toned down in the film version).  Not exactly what most people expect in a romance novel.

I should have seen it coming, of course.  I came up with this plot centered around repressed memories of sexual abuse and murder, and then when I came to the part where the repressed memories begin to surface, I thought, “I could have the character tell the story to his therapist or his lover (who is actually the viewpoint character), but it would be far more dramatic to show it in a flashback!”

Except that I soon realized that what I was writing was too horrific to describe in any kind of detail.  There’s a reason that I tend to use crimes against children to represent evil in my novels:  I find them absolutely horrifying.  I don’t think I’m alone in this.  So there’s a fine line between being boring by not dramatizing it and showing too much by dramatizing it.  It wasn’t my intention to write a horror novel.

So I wrote the scene out, but didn’t go into graphic detail.  We’ll see what my friends say, when they read it.

The other potential problem is that my viewpoint character (Tom) almost disappeared in the last quarter of the novel, as Kevin works with the police to piece things together.  I had to go back and make sure he said something now and then to remind readers that he was still there.  I don’t know if that worked.  We’ll see.

What all of this demonstrates is that I can’t write in a vacuum — at least, not all of the time.  While I’m working on the first draft, I don’t let anyone look at it.  I generally have a sense of whether it’s good or not and I like to think I’m a fairly good storyteller.  At that stage, I don’t want people injecting their opinions.  But as soon as that first draft is done, I lose the confidence I had while writing.  Sometimes my ego is too fragile for criticism for a week or so, as my husband has learned, but fairly soon after the first draft is done, I need feedback to tell me if the story came out any good or if it should be scrapped.