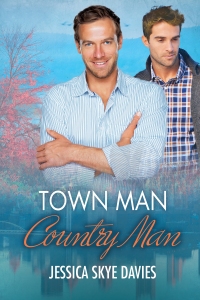 First off, thanks to Jamie for hosting today, it’s an honor!

Now, about these boys….  Characters tend to be the thing that pulls me into a story more than anything.  I blame my Anglo-Celt background for this.  As one fellow literati friend has put it, “Brits are the best when it comes to character studies.”  While the initial “seed” of Town Man, Country Man was the settings (as mentioned in my July 29 posting on Jana Denardo’s blog http://www.janadenardo.com/2016/07/29/guest-blogger-writing-your-own-backyard-jessica-skye-davies/ here), it was the characters which made the seed germinate and grow into a full story.

TMCM has been described as “opposites-attract”, and it is, but Josh and Ben have a lot in common, too.  It’s just that the things that are different between them are things which are deeply ingrained parts of them, things which are not always easy to examine in oneself, let alone change.

Josh, the town man, is immediately attracted to Ben, our country man, when he spots him in the crowd at a wedding.  Apparently, Ben is just as interested, as it’s Ben who strikes up a conversation then asks Josh to dance.  For either of them, it could have been just like any Saturday night at a bar or club.  Maybe it was the inherently romantic setting, but Josh and Ben both saw something more than a one-nighter in one another.

Josh finds himself surprised by wanting to date Ben, primarily because Josh hasn’t seen any of his lovers twice ever since getting out of a relationship that got steadily more emotionally abusive as it went.  Until meeting Ben, Josh felt no need to change what was working just fine for him.

Ben, on the other hand, has spent a long time looking for love in all the wrong places.  His home is much more rural (though still not far from the city), and he’s not out in his community the way Josh is.  Most of the guys Ben has met aren’t looking for any kind of commitment or strings-attached, some are even married and don’t consider themselves anything but straight.  So when Ben meets Josh, and Josh accepts his offer of a dinner-date, Ben begins to let his guard down more than he has in a while.

The passion burns fast and bright between them and it kindles a giddy, I-thought-I-was-too-old-for-this-feeling romance in both of them in very short order.  Both a bit love-drunk, neither of them pause to consider that wanting a relationship to become long-term and making that happen are two different things.  Lasting relationships necessitate sacrifice, which is a bit difficult to think through when you’re all loved up on romantic weekends together.

For Josh, the biggest problem is having to wait till the weekends to get together with Ben because of the distance between their homes (50 miles might as well be 500 to most Pittsburghers!)  When Josh finds out that his best friend, Dante, has been dealing with a personal crisis all alone, Josh realizes that the time he’s been spending with Ben has come at the sacrifice of making time for a lifelong friendship.  It knocks him for a loop and causes him to do some real soul-searching.

With Josh suddenly putting off Ben’s invitations but not opening up about what’s going on, Ben gets the feeling something is wrong and finally decides to stop by Josh’s place on a Sunday morning and talk about things.  Well, that lasts only until Ben finds out that Josh had a friend staying with him overnight.  Having been down that road before, Ben assumes the worst and doesn’t want to hear Josh’s ‘it’s not what it looks like!’  And yet… Ben has never had anything like what he’s had with Josh, and now it’s Ben’s turn to do the serious introspection and decide what’s important in his life.

Both of them are going to have to decide if what they have in common outweighs the differences in their personalities, and if finding a way to go forward is likely to be worth it.

“Town man” Josh Douglass meets “country man” Ben Bauer at a mutual friend’s wedding, and passion kindles immediately. As urbanite wedding planner Josh and closeted contractor Ben spend more time together, they develop a deep, comfortable romance despite the fifty miles between their homes—and despite the drastic differences in their lifestyles. But as they grow closer, it becomes apparent that Josh and Ben have been enjoying the first flush of love without giving much thought to longer-term logistics.

A crisis leads Josh to ask himself serious questions about how his relationship with Ben can realistically work. But just as Josh is feeling ready to talk about the next step with Ben, a misunderstanding threatens to put an end to their love affair. Compromise is the key to any relationship, but it isn’t always easy to balance careers, friendships, and family expectations. Josh and Ben just need to see that bringing together the best of both their worlds is well worth the sacrifices they’ll have to make to remain in each other’s lives.