Christmas doesn’t have to be white

So the Christmas season is here, and all those wonderful (if formulaic) Hallmark movies are hitting Netflix and Amazon. I don’t want to bash the movies, because I love them. But there’s something that might not be immediately apparent to white viewers (like myself) that I feel I should point out: Hallmark was originally a Christian programming channel. And unfortunately, that means they still cater to a primarily white, straight audience.

I’m not entirely sure why this is. There are a lot of Christians in the country who are black, Latinx, Asian-American, and so on. Yet we rarely see them in movies and TV shows. And while it’s true this problem is endemic to our culture, it seems to be particularly slow to change in Hallmark programming. I watched an entire season of The Good Witch (which I love), unable to spot anyone – even in the background – who wasn’t white. In season two, they had one or two black characters sitting in restaurants or wandering by on the street. In season three, some unnamed black people had lines! To be fair, the lead actress, Catherine Bell, is half Iranian, as mentioned in the article below, but I’m not convinced audiences are aware of that fact.

Don’t even get me started on the complete erasure of LGBTQ people. 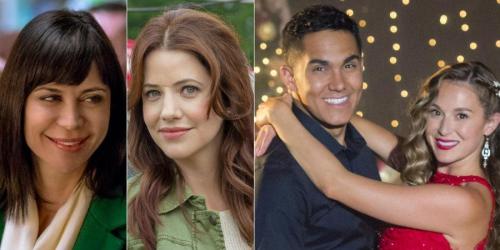 Why Are Hallmark Movie Casts So White? We Asked The CEO

I really don’t mean to be picking on just Hallmark. The company doesn’t generally have strong religious themes in their programming, these days, and it’s made some attempts in recent years to be more racially diverse. Black coworkers and bosses are becoming the norm, and there are some, if not many, films with black or Latina leads (I can’t recall ever seeing one with a male lead – they follow the romance novel formula). Other companies that produce Christmas programming have the same issues. Though as the article mentions, Lifetime is doing a bit better.

Though, again, if you find a prominent LGBTQ character in a Christmas film… it ain’t Hallmark. They have made some LGBTQ commercials for their greeting card line, which is progress, but we don’t even get supporting roles in their films.

This isn’t a scholarly article. I’m not going to quote sources, and you are free to think my opinion is full of crap. But in an attempt to be more productive than simply whining about the lack of diversity, I’d like to point out some favorite Christmas movies (from Hallmark and other companies) with diverse casts.

A young woman is given an antique advent calendar, and although she can’t open the doors, every morning she finds one open with a small toy inside that somehow predicts what will happen that day. This is a magical film with a wonderful cast. I fell in love with both of the leads. The plot gets a bit muddy, and there were some cliches concerning “the other man” I could easily do without, but I adored it. Currently, you can find it on Netflix.

Miss Me This Christmas & You Can’t Fight Christmas (Pokeprod)

I’m listing these two together, because they were filmed at the same time and released simultaneously. They take place in roughly the same time frame, so if you watch them back to back, you’ll see two or three scenes repeated from different viewpoints, as the characters bump into each other. The acting isn’t spectacular, though the male lead (Redaric Williams) from Miss Me This Christmas has got to be one of the sexiest men I’ve ever seen on film, and the female lead (Brely Evans) from You Can’t Fight Christmas is funny and energetic, and I love the fact that she’s portrayed as sexy, even though she has a few extra pounds. We also have a side character who, if I recall, is openly gay.

In Miss Me This Christmas, Regina (Erica Ash) and Franklin (Redaric Williams) are having trouble with their marriage, and end up separating. A year later, they’re supposed to finalize the divorce on Christmas Eve (as one does), but they keep being reminded of how much they love each other. The plot in this one is weak. Very weak. I loathe the Big Misunderstanding trope, in which a couple’s problems could all be solved if they’d communicate and sort out the ridiculous coincidence that caused the fight to begin with. But it’s otherwise sweet, and the best friend, Trish (Eva Marcille), is highly entertaining.

In You Can’t Fight Christmas, Edmund (Andra Fuller) falls for the decorator, Leslie (Brely Evans), his grandfather hired to spruce up his hotel for the holidays, but he and his business partner have plans to take over the hotel and make it upscale and unavailable to the people in the neighborhood who made it great. Another very weak plot full of cliches, but still entertaining and sweet.

I’m going to end this short list with a film that isn’t really in the same category as a Hallmark movie. This one is reaching way back in time to the 1990s, and it starred two big box office draws, at the time: Denzel Washington and Whitney Houston. It’s a little unfair to compare the low-budget productions above with a $40 million dollar film. But still, it’s good. Both this and the original Cary Grant/Loretta Young film it was based upon (The Bishop’s Wife) can get a little uncomfortable, since the angel sent to save a marriage falls in love with the wife, in both cases, and she starts to fall in love with him. Not cool. But I still enjoy them both.

There are others I’ve seen recently, and in the past, so I’ll probably add to this list. I need to dig them up. But I’ll stop there for now. If you have favorites I haven’t mentioned, please feel free to drop them in the comments!