Some comments about “Murder on the Mountain”

I’ve picked up a habit from my friend Eli Easton of using the review section of Goodreads to put in some comments about my novels (without rating them, of course).  So I put some comments in about Murder on the Mountain.  But after several comments by readers I felt compelled to expand my comments a bit to clarify exactly what the novel is and is not.  At this point, the comment has grown large enough that I think it warrants a blog post.  So here it is:

Murder on the Mountain is a cozy—a murder mystery solved by an amateur detective, where all the suspects are gathered in one place. In this case, in a Victorian hotel at the base of Mount Washington.

I did a lot of research into the way a murder investigation on the mountain would be conducted, including sending a list of questions up with a friend of mine who was visiting the summit to stay with the rangers for a week.  In the process, I discovered that local police don’t really get involved.  The state park rangers have jurisdiction.  If they choose, they’ll call in the state police from the Major Crimes Unit in Concord, NH.  Autopsies are likewise done in Concord.

However, the novel isn’t a police procedural, despite Kyle being a state police detective. Just as Jessica Fletcher in “Murder, She Wrote” somehow infiltrates police investigations wherever she goes, Jesse manages to do the same thing. I would never suggest that the real NH State Police would allow a civilian to tag along on an investigation. Although Jesse checking into the hotel and talking to the suspects is well within his legal rights.  Kyle could choose to dump him for it, but he couldn’t legally stop him.  Like other cozies, the story is largely about the puzzle.

This is another novel set in my home state of New Hampshire. I spent my early years in Gorham, near the base of Mount Washington, and my father worked at the summit of the mountain. I spent some time up there with him when I was about seven, at least once sealed inside the Observatory for a week during the severe winter weather—hurricane force winds and temperatures as low as 70 below zero. 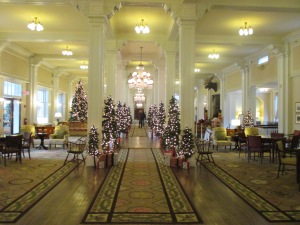 The Sherman Adams building is fairly recent, since the Observatory building I remember burned down. Now Mount Washington Park rangers stay at the summit, along with the Observatory staff. They have jurisdiction over any crimes committed on the mountain, though they may call in the State Police Major Crimes Unit for a murder. This, of course, is what they did in the novel.

I set the bulk of the novel at the gorgeous Victorian Era Mount Washington Hotel. When I was a kid, we could never have afforded to stay there—I just saw it as we drove by. So I used writing this novel as my excuse to indulge my long-held fantasy of staying there for a weekend. My husband and I spent our anniversary there near Christmas, and the hotel was resplendent in more Christmas trees than I can recall. It was gorgeous.

That was also when we stumbled across the fifth floor…. I won’t tell you what we found there, but it was exactly as I described it in the novel. 😉

For those who have wondered about it, yes, I intend to write more mysteries with Kyle and Jesse as the sleuths!

I hope you enjoy Murder on the Mountain.