Finalists in the Rainbow Awards! 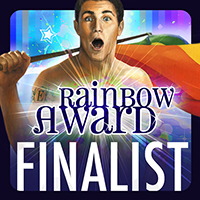 Both Billy’s Bones and By That Sin Fell the Angels are finalists in the Rainbow Awards this year!  My YA fantasy novel, Dreams, also made the cut!

Unfortunately, we won’t find out who won until December, and the competition is steep.  Click on the image to see the other finalists!  I’m honored to be included among them.

In other news, I’ve signed a contract with Dreamspinner Press for my college romance Screw-Ups!

I’ve also submitted a steampunk novella called The Watchwork Man for an anthology, finished round two of edits on my Christmas story (The Healing Power of Eggnog) for the Dreamspinner 2013 Advent Calendar, and I have part three of the Dreams of Fire and Gods YA trilogy (Gods) coming out on October 17th!

It’s been a busy two weeks.

The Dogs of Cyberwar

I now find myself without a deadline for the first time since the summer began.  So I’ll need to set some new ones.  I’ve been re-reading what I’ve written for A Mote in the Eye — part two of the B.A.L.O.R. Cycle, my cyberpunk trilogy which began with The Dogs of Cyberwar.  I’ve been promising to finish that forever, but other deadlines kept interfering.  I’m liking what I’m reading, so I’m setting myself a deadline of October 31st to have at least A Mote in the Eye finished and the third section started.  The story is, in my humble opinion, just too good to let it languish unread forever.

I’m also hoping to participate in NaNoWriMo this year.  I have a murder mystery in my head that takes place on Mount Washington.

2 responses to “Finalists in the Rainbow Awards!”