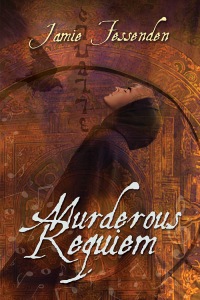 Murderous Requiem has been released!

It is now available for purchase at Dreamspinner, Amazon, Barnes & Noble and other retailers.

Over at MM Good Book Reviews, it’s received 4 out of 5 stars!  “The mystery and suspense are good and leaves a thread of tension throughout the book. There’s death and betrayal, love and hope and occult dealings. I actually think this is an intriguing story that shows a ‘whiter’ or good side to the occult. It has informative information and you can see that the author has done a lot of research.  I will recommend this to those who love mystery and suspense, occult dealings, twists, betrayal, underhand dealings, murder and manipulation and a happy for them ending.”

Jeremy Spencer never imagined the occult order he and his boyfriend, Bowyn, started as a joke in college would become an international organization with hundreds of followers. Now a professor with expertise in Renaissance music, Jeremy finds himself drawn back into the world of free love and ceremonial magick he’d left behind, and the old jealousies and hurt that separated him from Bowyn eight years ago seem almost insignificant.

Then Jeremy begins to wonder if the centuries-old score he’s been asked to transcribe hides something sinister. With each stanza, local birds flock to the old mansion, a mysterious fog descends upon the grounds, and bats swarm the temple dome. During a séance, the group receives a cryptic warning from the spirit realm. And as the music’s performance draws nearer, Jeremy realizes it may hold the key to incredible power—power somebody is willing to kill for.