It is no secret by now that I love research. For anyone who’s kept up with my blog posts (especially the last one about research) or read my bio, they are, undoubtedly, aware of just how much I do.  Some of it isn’t necessary, but that’s okay. I love it and I feel it makes a world much fuller and more realistic if you include all the right details.

One big portion of that is the world-building.  Most of us have a general idea when and where our story will take place, but refining that into something that can become real, that the reader can feel and smell and hear takes a lot more thought – and the aforementioned research.

I had a firm picture in my head of what the world was that Teman came from and where he lived. I knew it was a desert, I knew he roamed (he was a gypsy, after all).  I knew what the city they were in during the opening chapter looked like in my head. I just had to get that on paper. 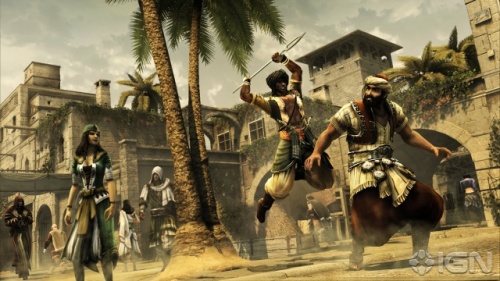 The pictures I found were amazing! It’s very easy for me to get lost in the first place on the internet and when I found so much that was exactly what was in my head, it took a supreme effort to remember I had a lot to do.   I discovered that the second series of Ubisoft’s Assassin’s Creed games had a lot, visually, of what I thought my world should look like.  Set at a later time than my story (Assassin’s Creed: Revelations happens during the Renaissance) but the desert cities didn’t change all that much in that time, so I knew I’d found what my city looked like.

I have boatloads of details in my head that never made it into the book which is, I think, one of the downfalls of world-building.  I have so much I want to tell about! So much I want to put in! But I know that I wouldn’t necessarily want to read pages and pages of description like some of my favorite authors are guilty of (*coughTolkiencough*).  So even though I know that there is a large, busy marketplace that runs from the river dock through a number of the tight, winding streets, it didn’t make it in there.  Even though I can see the tiny alleys, hear the fishwife calling her wares or smell the roasting lamb, it stays in my head.  And though I know that Behekem contains everything from the shady parts of town (with the taverns Teman undoubtedly patronized before being caught) to the upper class districts (where the nobility keeps residences while they are there), it’s something I just have to make notes on and hope someday I get the chance to put it in a blog post like this. 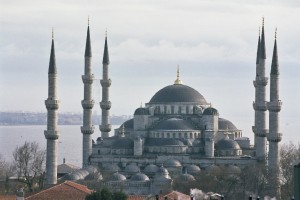 But Neyem’s capital city of Behekam was only a small part of the world. I quickly realized that the main city (and its palace, which I loosely base off of the Blue Mosque in Turkey) was by far, not the only setting I’d be using and set out to draw a very rudimentary map.  Thankfully, Jamie rescued me and took my (really basic) map and turned it into something quite beautiful (See above).  So as I started to put together my outline, I saw desert trips, other cities and even an oasis to include.

So back to the drawing board I went to decide on the other countries.  My world is small, I will readily admit that.  But I decided that Neyem, its neighbors and the politics surrounding it all didn’t necessarily need to be huge.  So I made my own choices and gathered Europe and Asia and brought them much closer.

To the northwest is Saol.  Think Medieval England the names are Celtic, the vegetation very European and the country, in general… quite vague.  I needed contrast to Neyem and the Asian-based neighbor Tiantang, but knew that I wasn’t going to need remarkably more than that.  So I settled on the country, the capital (Calafort) and a rather… entertaining gentleman who serves as its ambassador.  I do hope you enjoy reading Lord Atherol as much as I enjoyed writing him.

To the southwest, then, is Tiantang.  Obviously Asian, it is unashamedly patterned after China.  The Empress Tian lives in a palace that is, in essence, the Forbidden City and I spent great gobs of time looking through pictures of it and China in general (though weeding though the pictures of the Great Wall was annoying).  So when I finally pulled myself out of the Internet and started writing about Bathasar, Teman and their company approaching the city, I am sure I spent too much time describing it.  A big part of it was inspired by this picture: 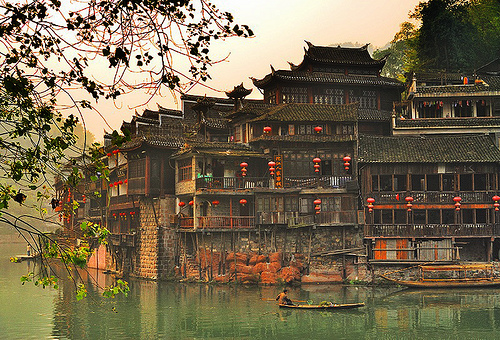 Duankou, Tiantang’s capital city is an odd mix of the three countries in my world: Tiantang (of course), Neyem and Saol.  It is a prominent port city with a spot on my world’s version of the Silk Road – the overland trade routes.  No wonder it’s a conglomeration of the world.  It is set up in districts – one for Saol, one for Neyem and the biggest (of course) is for Tiantang, all characterized by their architecture and marketplaces.

The world of Choices is relatively small, but I hope it still feels full and diverse with enough details to pull the reader in and give them the opportunity to feel and hear it.  I certainly enjoyed making it and put even more of it into the next book, Deception.  What do you like to see in the worlds you read and write about? What makes it real for you?

Do be sure to leave a comment so that I can award a bag of goodies to someone!

Thank you so much, Jamie, for hosting me! It’s a real honor and pleasure.

Born and raised a gypsy in the late eleventh century, Teman values freedom over everything. He and his best friend, Jasim, are thieves for hire—until one night they’re caught and their precious freedom is revoked. Given the choice between the dungeons or palace pleasure slavery, they become slaves, but Teman vows to escape someday.

Bathasar doesn’t want the throne. He supports his brother instead, which suits their sadistic father, Mukesh. When Teman, the handsome slave Bathasar has secretly been watching, saves his life, Bathasar requests a slave for the first time. Before long, Bathasar and Teman fall in love. But all is not well. One day Mukesh brutalizes Teman before the court, angering the empress of a neighboring nation. To appease her, he then offers her Jasim as a gift, and Teman decides to stay with Bathasar for now—despite the abuse he may suffer.

The peace doesn’t last. Mukesh plans to invade Jasim’s new country, and Bathasar must find a way to stop the destruction. But if he succeeds, he’ll ascend to the throne and have the power to grant Teman his liberty. Then Teman will surely leave him. What other choice could a gypsy make?