My goal for the past couple years, ever since The Christmas Wager was accepted for publication, has been to become a full-time writer.  As I’ve discovered over the past year, there are three parts to this, and they aren’t necessarily connected:

2)  Sell your stories to a publisher.

3)  Sell your stories to readers.

Over the past year, I’ve knuckled down and begun writing in earnest.  Since the beginning of the year, I estimate I’ve written about 150,000 to 200,000 words.  That’s finished, polished words — good words — that ended up in final drafts.  Those words have been in two complete novels (50,000 and 65,000 words respectively) and a 23,000 word novella, plus finishing up other novels I started before January.  It isn’t the copious output of some writers I know, but it’s pretty good, especially considering the fact that I’ve done it on top of working full-time in the computer industry.  Basically, I was coming home most nights, having dinner with my husband, and then retreating to my office to write.  I say “most nights,” because there were periods when I just couldn’t do this — generally after I’d finished a month or so of work on a novel and just needed a break.  Then I played a lot of computer games, like CSGO, using the best gaming mouse for csgo I found online.  And there were nights when my husband and I spent time together, of course.  Making Erich wonder if he’d be better off married to a dakimakura isn’t part of the plan.

But overall I consider that goal to have been obtained.

As far as selling them goes, I’ve done well on that front as well.  I’ve sold everything I’ve submitted, which includes four full-length novels and that novella I mentioned.  This may not always be the case, of course — markets can dry up, publishers can decide your work simply doesn’t sell, all kinds of things can happen.  But that’s the case with all jobs.  There are no guarantees.  So for now, I’ll just say I’m doing well in that area.

The last one is the tricky one, at least for me.  I tend to get pretty good reviews.  Sure, there are bad ones mixed in here and there, but for the most part, I think I fare pretty well.  But good reviews doesn’t necessarily translate into good sales.  I had a couple really good quarters at the end of last year and the beginning of this year, in which We’re Both Straight, Right? was still selling very well.  That gave me a lot of optimism to start off the new year, but then my royalties started dwindling.  Not to nothing.  I’m still making more per quarter than I made for my very first quarter, when The Christmas Wager and The Meaning of Vengeance came out.

So on the plus side, I can honestly say that my earnings from writing have increased five-fold per year, since I began.  That sounds pretty impressive.  But in fact most of the money that came in this year — I’d say about four fifths of it — came from advances on my novels.  And the problem with that is, I probably won’t be able to increase my writing output substantially over the coming year, which means I can’t count on selling more than I have for this year.  Maybe.  But not all that likely.

So that leaves me with income from royalties.  And that’s a total unknown.  What sells and what doesn’t sell is something that not even publishers can predict.  My next release might be a huge best-seller.  Or it might languish in obscurity.  I had high hopes for By That Sin Fell the Angels.  It’s gritty, emotional, controversial, timely… That should be a formula for success, right?  Well, not so much.  Again, good reviews, but it doesn’t appear to be selling.  I could be wrong — I haven’t actually seen the sales figures yet.  But judging by the attention it got on sites like Goodreads, I’d say probably not.

This must sound like a huge pity party, but it’s not.  (Well, not much.)  I’m being confronted by a harsh reality here:

Even if my books sell to publishers, that doesn’t mean they’ll sell to readers.

And if they don’t sell to readers, how long will they continue to sell to publishers?  Perhaps not long.  Publishers need to make back their investment.

It’s possible of course that my next book, or the one after that, will be the one—the book that suddenly strikes a chord with readers and lifts me out of obscurity.  But that’s impossible to predict, and I’ve never been the type of person who puts much stock in winning the lottery.  I’ve always pinned my hopes upon succeeding through skill and talent, which I do believe I have.

I know other authors who don’t hit the best-seller lists (meaning, in the M/M corner of the world, that they sell over 2,000 copies a month — something I can’t conceive of, right now), but have still managed to do all right by having a lot of books out and selling enough copies of each to make it worthwhile.  Perhaps I’ll end up falling into that category.

It’s also possible that I’m simply writing in the wrong genre.  This is something my husband has been pushing me to consider lately.  By That Sin Fell the Angels is really a fairly mainstream novel.  So is Murderous Requiem, if I took the sex out of it.  It seems that more and more, when people ask for books to include in this or that romance novel giveaway or some such,  I’m finding myself holding back, because my novels don’t really fit what they’re looking for.  I love the M/M genre, but perhaps I don’t really write M/M.  So perhaps I should start branching out to other markets.  But the one thing I refuse to do is turn my gay protagonists straight to please mainstream publishers.  That would quickly kill any passion I have for the craft.

So this is a sober New Year’s for me, in this regard.  The excitement I felt at this time last year, when my royalties checks were growing by leaps and bounds, has faded as they dwindled again.  I’m certainly not giving up writing.  I love it.  And I still find it immensely rewarding.  But I can no longer say with confidence that my future as a writer is particularly promising.  So my New Year’s resolution is simply this:

To continue writing and honing my abilities as a writer, so that I’m putting the best I can offer out there on the market.

And I’ll just have to see what happens.

The Next Big Thing Blog Chain

Last week, fellow author Cate Ashwood tagged me on her blog as part of her Next Big Thing, so now it’s my turn to post my latest project and then pass the baton to another author.  So here’s what I’m working on:

The Next Big Thing

What is the title of your book?

How did you come by the idea?

I was inspired by a number of different things, including The DaVinci Code (the book and the film), some books I bought years ago on Marsilio Ficino (a Renaissance magician, doctor, and musician who believed that music could heal the body), my interest in Norse mythology, Alfred Hitchcock films like The Birds, and murder mysteries like And Then There Were None.

What genre does your book fall under?

Which actors would you choose to play your characters if it were a movie?

I’m not really sure I can pick actors, apart from perhaps Brad Pitt in Interview with a Vampire as Bowyn.  I did find pictures online that captured what I imagined.  From left to right, these would be Jeremy and Bowyn, the two love interests in the novel, and the enigmatic playboy, Rafe.

What is the one-sentence synopsis of your book?

Renaissance music expert, Jeremy Spencer, is dragged back into the occult commune that he co-founded years ago with his ex-boyfriend, Bowyn Clarke, in order to transcribe an ancient manuscript, but he soon discovers the Temple holds dangers beyond stirring up old feelings he isn’t sure how to deal with — the manuscript contains a dark secret that somebody is willing to kill for.

Will your book be self-published or traditional?

It will be published by Dreamspinner Press in eBook and paperback.

How long did it take you to write the first draft of your manuscript?

Hard to say, because I don’t always write a complete first draft before going back and rewriting, especially in something this tightly plotted.  I went back over the first half several times before I wrote the second half.  From beginning to finally having a complete story in my hands was probably a little over a  year.

What other books would you compare this story to within your genre?

It’s a bit like The DaVinci Code, though there is considerably less running around.  It all takes place in one location.  I’m not sure which M/M novels it might compare to.  (EDIT –12/31/2012:  I am now reading a book by Shelter Somerset called The Rule of Sebastian, which I wasn’t aware of when I first wrote this post.  It has a very similar feel to Murderous Requiem, though it’s much more of a murder mystery than Requiem is.  I haven’t finished it yet, but I suspect I’ll be able to give it a good recommendation when I have.)

What else about your book might pique the reader’s interest?

To put this mystery together, I drew from a number of sources:  the writings of Marsilio Ficino, alchemy, the life of John Dee, Enochian, ceremonial magick, Aleister Crowley and his occult order, the O.T.O.  I also blended in some horror elements to give the mystery a creepy feel.

So that’s my Next Big Thing.  The writers I’m tagging for next week are:

“Murderous Requiem” has been contracted! 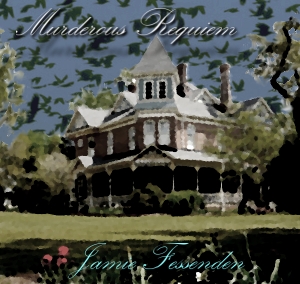 Sounds a bit like a disease, doesn’t it?  But no.  I’ve signed a contract with Dreamspinner Press for my occult mystery novel, Murderous Requiem!

As anyone who’s been following my blog or facebook page knows, I’ve been fretting about the marketability of this book for a long, long time.  It has a lot of sex, some of it rather raunchy, and more importantly a lot of occult information concerning ceremonial magick that could make some readers uncomfortable.  There is a romance between the main character and his ex-boyfriend, but since they’re in a sort of “free-love” commune environment, they have sex with other people while they’re working things out with each other.  Some readers don’t like that.  There are also some parts that cross over into horror.

I wasn’t sure if Dreamspinner would like it, because it doesn’t fit the classic romance model.  But they publish a wide variety of stories, so it was worth submitting it to them to see.  And now I have a contract!  Yay!

No info on a release date at this stage, but I’ll let everyone know when I have something.  Incidentally, the “cover” design to the left isn’t official and definitely won’t be the cover.  I cobbled that together from pictures I found on the Internet and used it as my “cover” for NaNoWriMo a couple years ago.